In a society where saving 10% of your salary is considered good money management, how do you end up with more than 100% of your take-home pay after a 10 year career? Here’s how one doctor managed this remarkable feat.

By Physician On Fire
Why Is It So Dangerous To Be Financially Average?
How To Get Rich With Contrarian Thinking

It’s true. I’ve got every last dollar. And then some.

Like most who write in the personal finance realm, I spend a fair amount of time contemplating money. As I’ve watched our net worth rise in recent years, I couldn’t help but wonder how much money I’ve taken home in my ten year career as a physician, and how that number compares to our current net worth.

How much would we be worth have if we still had every after-tax dollar earned over the the last ten years?

Less than we have today.

That’s right. As the title suggested, our net worth is slightly higher today than the sum of the paychecks I’ve brought home.

How is this possible? Inheritance? Nope. Lottery? No, sir. Lucky stock picks? No way.

We did it by living well, but well within our means, investing continually through the great recession and gradual rebound, and generally being smart with our money.

I use the term “our” because although we have done this with one income, I am married, and my lovely wife and I are partners in all things, including our pooled nest egg.

While she has contributed little in terms of income, she contributes immensely to our household, and has done the lion’s share of all the work that goes into raising two amazing young boys. 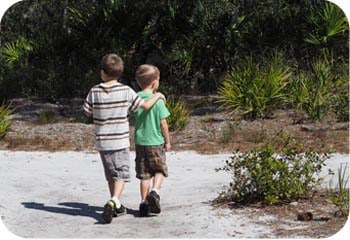 When I crunched the numbers and came to the startling conclusion that I could account for every dollar earned somewhere in my net worth calculation, I knew I had a story to tell. It might be less remarkable if we were talking about a thirty-year career in which those first dollars earned had decades of growth due to compound interest.

But this happened in a little more than ten years.

I don’t have every pay stub, and even if I did, I don’t have the time or patience to add them all up. That wouldn’t give the whole picture anyway, since I’ve been paid in different ways with different jobs. I worked as a locum tenens provider and had an S corporation for a number of years. More recently, I have been an employee with a W-2.

For the first eight months of 2016, I used a year-to-date pay stub to figure my take-home pay. To come up with a fair measure of take-home pay for previous years, I turned to my tax returns. I have every 1040 from 2006 (the year I finished residency) to 2015.

But It Didn’t Happen Overnight

It took 12 years of education and training to be in the position to make that kind of money as an anesthesiologist.

I’ve worked long hours, given up hundreds of weekends and endured many sleepless nights. I entered a high paying medical specialty, and have wisely taken advantage of geographic arbitrage to earn even more than many of my colleagues who have made every sacrifice that I have.

To calculate taxes paid, I added Box 61, Total Tax, to the Tax Paid from Schedule A, which includes state income tax and real estate taxes paid.

I do every reasonable thing I can to minimize taxes, but when you are a high wage earner, you simply cannot avoid paying a “fair share” of income tax.

To estimate my take home pay, I subtracted the tax paid from total income.

While I know it to be true, it still amazes me to see it on the screen in front of me.

Our Net Worth Calculation

Net worth calculations can be tricky business, but I keep it relatively simple. I add the value of all of our investments including 529 accounts, real estate consisting of a primary and secondary home, and cash.

The only debt we have is a tiny bit of short-term credit card debt, which I count against our cash holdings. Yes, we always pay credit cards in full.

Eventually, the 529 accounts won’t be ours, but I count them because I could access that money with a 10% penalty, and until it pays for tuition, it’s still mine. 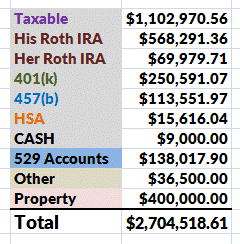 What is that “Other” category? I’m a believer in having up to 5% of your money invested in any fun way you choose. For me, beer is fun. So I’ve got a small ownership share in a microbrewery, and have loaned money to another startup brewery.

I get to act like an owner, learn a bit about the business side, and I once participated in brewing a 465-gallon batch of amber ale, which was pretty exciting for this homebrewer who brews batches 100 times smaller.

Do we have assets that we don’t include in this calculation? Sure. We’ve got a couple cars, but those are depreciating assets, so we don’t count those.

We also have two homes chock full of mid-century modern furniture, some bicycles, thousands of Legos, and a Joe Montana rookie card. While there is some value in all of those items, the fact is our portfolio value varies day to day at least as much as the value of all that stuff.

Another asset that I track, but do not count in my net worth calculation, is our Donor Advised Fund (DAF). I don’t count it because it’s money we’ve already designated to be given away, and once you’ve donated to the Fund, there’s no going back.

The current value of this fund is $85,268.08. We treat it like a separate nest egg, adding to it annually, while giving around 5% away to charities of our choice each year. My website, Physicianonfire.com, has a charitable mission to donate half its revenue, and the DAF will be a recipient of the bulk of our initial giving.

How did we make this happen?

I’ve shown you how I arrived at the conclusion, but haven’t shared any details to explain how it was possible for us to now have every dollar I’ve earned.

I also need to point out that I started from a net worth of approximately zero when I was a 30-year old new attending in 2006. I had some home equity in a condo, much of which would soon vanish as the housing market collapsed. I also had a Roth IRA worth a low 5-figure sum.

Those assets were easily offset by a high 5-figure student loan debt that had taken turns in deferment and forbearance while I was a resident. I don’t have an exact number, but my net worth was very close to nothing.

First and foremost, mindful spending and relative frugality over these ten years have been crucial. If we were spending even half of our take-home pay, we would definitely not have it all at this point.

It’s not that we don’t spend money; over the last 12 months, we spent about $75,000 as a family of four. Perhaps not coincidentally, $75,000 has been identified as the salary above which you see diminishing returns when measuring happiness. We don’t use a budget; budgets are not sexy. But we are aware of spending, and do our best to spend in ways that will make us happy.

While spending $75,000 a year may not strike you as frugal at all, relative to my peers, I am a very frugal physician. A recent Fidelity study showed that nearly half of all physicians surveyed were saving less than 15% of their income and not maxing out offered retirement plans. Meanwhile, I’ve maxed out every available retirement account, and have more than a million dollars invested outside of them. My net savings rate (calculate yours here) is approaching 80%.

“The Bean.” A fun and free attraction

Second, we have invested in the stock market, and after a sharp decline early in my career, the market has rebounded nicely. It’s fair to assume that our spending, which we can guesstimate at $750,000 over ten years, came largely from market returns.

Truthfully, our spending over that time was probably lower. Early in my career, we had no children, and our room and board was covered by the hospitals for whom I was working for as a locum. Our spending in those early years was probably half what it is now. We took the “live like a resident” mantra, advice for doctors not to ramp up spending to match a newer, bigger salary, to heart.

I keep my portfolio fairly simple, investing in Vanguard index funds. I am happy to accept market returns, understanding that it is very difficult for investment professionals, let alone amateurs, to consistently beat the market.

Since my graduation from residency at the end of June, 2006, the S&P 500 with dividends reinvested has more than doubled, with a return of 113% or 7.71% annualized. That includes a period in which it lost about half its value, hitting a nadir in March of 2009.

I keep my investment fees extraordinarily low. I have read numerous investing books and websites, and I am comfortable being a do-it-yourself investor.

A weighted average of the expense ratios of my investment portfolio’s funds is 0.08%, which costs me $1,600 per year. If a professional were managing $2 million for me with a 1% management fee with funds averaging a relatively low 0.5% expense ratio, it would cost me $30,000 a year. Fees compounded over a lifetime can cost you millions.

Building wealth takes time. I was investing when the market was dropping like a stone. I invested at the bottom, and on the way back up.

Compounding takes time. If I had tried to write an article like this a year or two ago, the math would not have worked out. Time is on our side. Yes, it is.

We have stayed the course, never panicking and selling low, or buying into a hot stock that had already realized its meteoric rise. From this point on, there’s a good chance my net worth will continue to surpass my career earnings.

That may change if we have a bear market in the near future. And that would be OK. Another buying opportunity.

What Can You Do?

While our success has been somewhat accidental (I certainly took a meandering path to get here), I can give you some advice. If you’d like to have a chance to replicate what we’ve done, do the following:

That’s it! I hope you are intrigued by my story. This is the first time I’ve revealed our net worth online. I was hesitant, but I felt this was a tale worth telling. I hope you agree. I look forward to reading your comments below.

The Physician on FIRE is an anesthesiologist, husband, and father of 2 boys who became Financially Independent (FI) at age 39 and has plans to Retire Early (RE) in his forties. He has more hobbies than time to enjoy them, which include experiencing the outdoors, photography, homebrewing, travel, and running. He also enjoys writing, publishing a couple original articles per week on his own blog, along with a weekly compilation of other great articles, The Sunday Best.